This is what’s wrong with the health and fitness industry

By now you’ve likely read about the UK ad by sports nutrition store Protein World. It features a heavily-airbrushed model in a bikini with the question in large bold font: ARE YOU BEACH BODY READY? 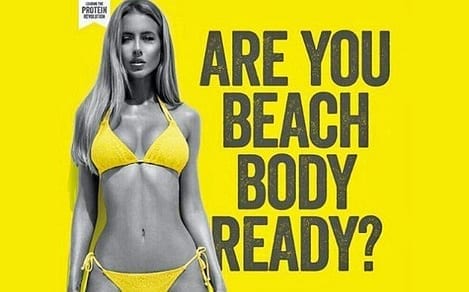 There are so many things wrong with such a message, I hardly know where to start. Firstly, they have presented a version of the “ideal body” that is highly photoshopped, completely unrealistic for most people, and dangerous to aspire to (both mentally and physically). It also suggests that looks are all that matter (what about health and strength??), and that those who don’t look this way don’t belong on a beach. Come. On.

The silver lining of this story is people’s reaction. More than 40,000 people have signed a petition demanding the ads be taken down. Others are choosing to let Protein World know what they think of the ads by marking them up with their own, much more positive, messages and posting them on social media. The campaign has its very own hashtag on Twitter.

While I don’t condone vandalism, I’m so glad that people are standing up against these harmful and superficial messages. Because as far as I’m concerned, all you need to be beach ready is sunscreen. Period.